Planning a trip to Norway and want to know what weather to expect? Take a look through our complete guide to weather in Norway and average Norway temperatures to prepare for your trip.

We’ll answer all your top questions about weather in Norway, including ‘is Norway cold?’ and ‘what is the average temperature in Norway?’.

The weather will vary depending on which month you plan to visit Norway and whereabouts in the country you’re planning to go. So let’s explore Norway weather by season and geographical location to give you all the info you need.

As a country that stretches all the way from 78° to 57° North in latitude, Norway’s climate is very variable depending on where exactly you are. In general, most of Norway has a maritime climate that is much milder and warmer than other countries that lie at the same degrees of latitude. For example Siberia, Alaska and Greenland.

This is due to the warm Gulf Stream in the Atlantic Ocean. It originates in the Gulf of Mexico and flows across the ocean to northwest Europe. Coastal areas of Norway, therefore, have relatively mild winters with plenty of rain. You’ll find snow in the mountains, though!

Inland regions of Norway have more contrasting seasons. Winters are colder and snowy, while summers are relatively warm and dry. With variable temperatures across the country, it’s best to be prepared for any weather you may encounter. As the popular Norwegian saying goes: “there’s no such thing as bad weather, only bad clothing!”.

If you plan to visit Norway during the spring months, we recommend that you are prepared for all types of weather in Norway. Pack clothes for every season! Spring can either be chilly or warm and can arrive at different points of the year, from late February to well into the summer months.

At the start of spring in around March, the temperature in Norway ranges from -4°C to 4°C, reaching between 6°C to 16°C at the end of spring in May.

As the snow begins to melt, waterfalls burst forth and flowers blossom. You can enjoy the last of the winter snow on a mountain ski trip, or take a beautiful nature walk along the sunny coast during spring in Norway. 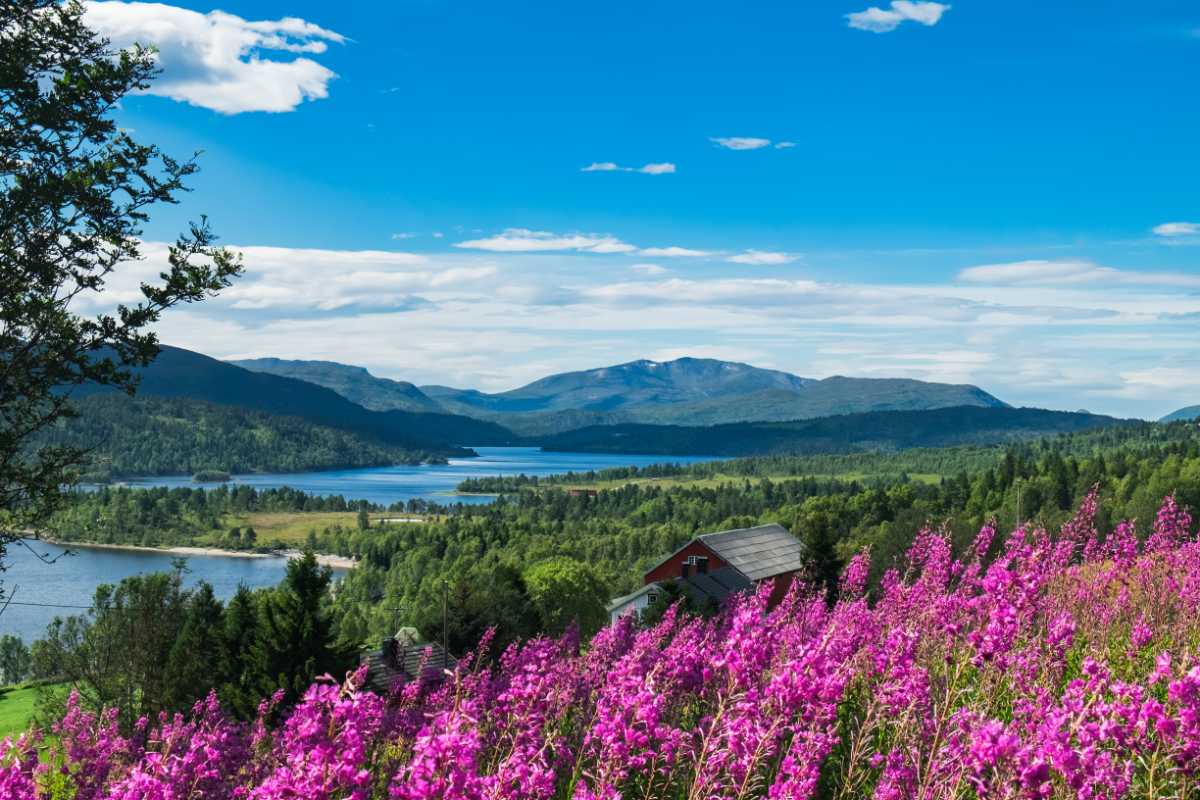 Summer brings the warmest weather and longest daylight hours, with average temperatures in Norway between around 12 °C and 25°C. The Southern Coast of Norway sees temperatures reaching up to 30°C and sea temperatures of 18°C. Perfect for swimming!

Western Norway is often wet during summer. Whereas the air to the east of the mountains, including Oslo, the South Coast and the East Coast is drier and warm. Summer in Norway brings some dazzling sunny days full of vibrant flowers and lush green valleys to explore.

You’ll also be able to experience the spectacular Midnight Sun at some places in Northern Norway during the summer months. This is where the sun shines for almost 24 hours above the Arctic Circle. 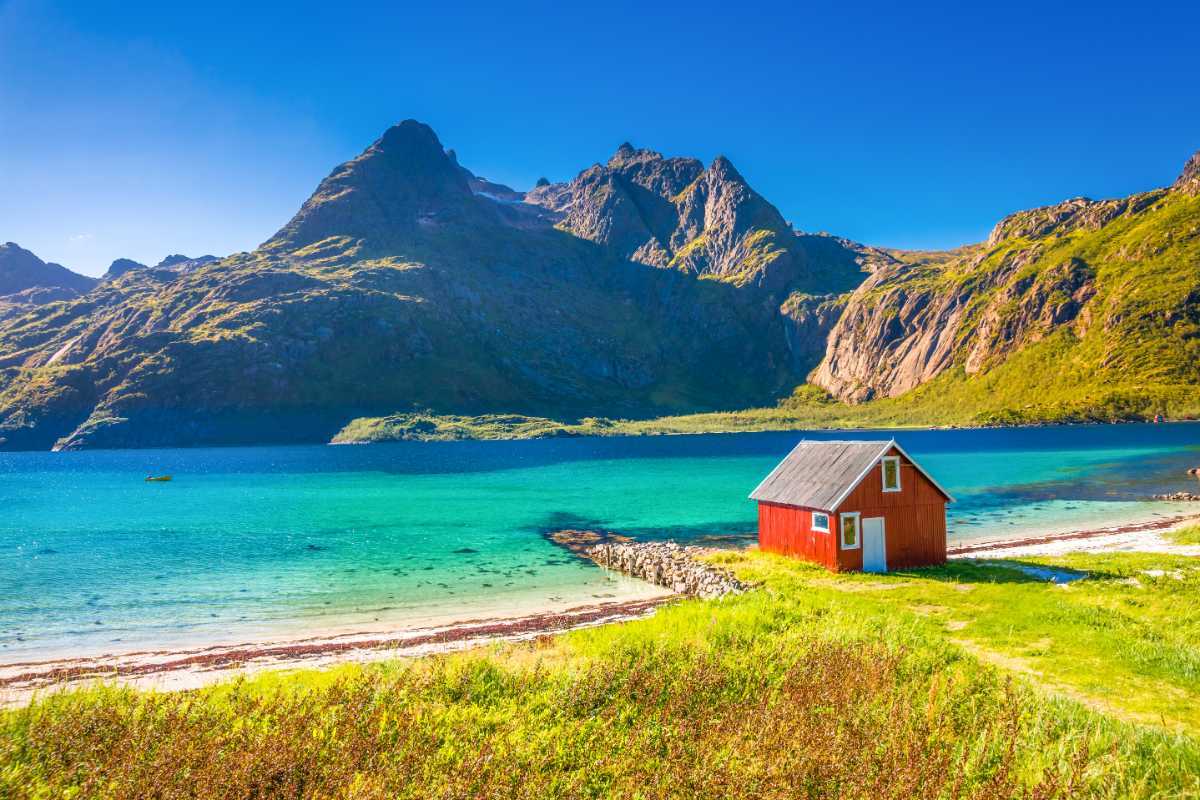 Average temperatures at the start of fall in Norway in September range from between 8°C to 18°C, dropping to between -1°C and 3°C at the end of fall in November. Harvest season sees mild weather in Norway’s coastal areas, including around the capital Oslo.

Fall gives way to winter earlier in Northern Norway and in the country’s mountainous regions, sometimes as early as October. In the rest of the country, winter arrives as November draws to a close. 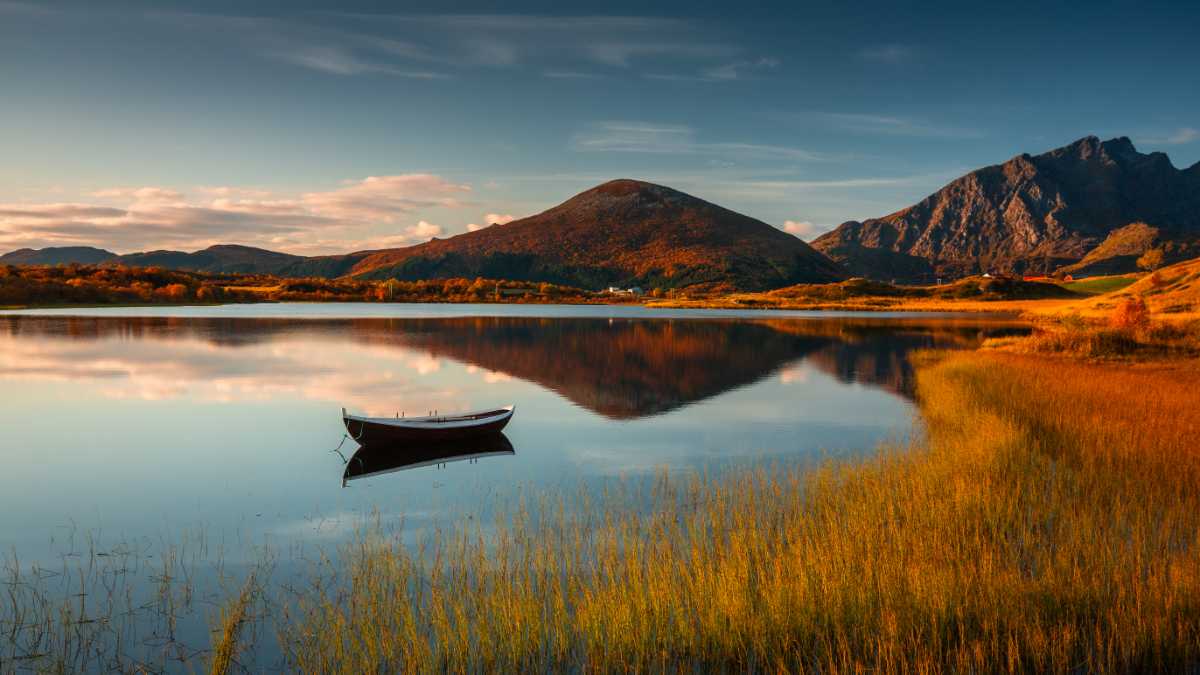 You might be wondering, ‘how cold does it get in Norway?’. The average winter temperature in Norway is a chilly -7°C. But surprisingly, the temperatures in Southern Norway, including Oslo, are usually milder at just below 0°C.

Inland areas in Northern Norway have an Arctic climate in winter. With lots of snowfall and freezing temperatures of -10°C to -20°C. Some areas have even reached -40°C! Brr!

A genuine winter wonderland, the winter season in Norway is the perfect time to enjoy skiing, snowshoeing or sledging. You can also take a beautiful train ride through the glorious snowy landscape to soak in the sights and sounds of Norway in the winter.

With long, dark winter nights, you can take this brilliant opportunity to go Northern Lights hunting in Norway. Northern Norway is the best place to spot this dancing light show. With some areas not seeing the sun at all for several months between November to February. 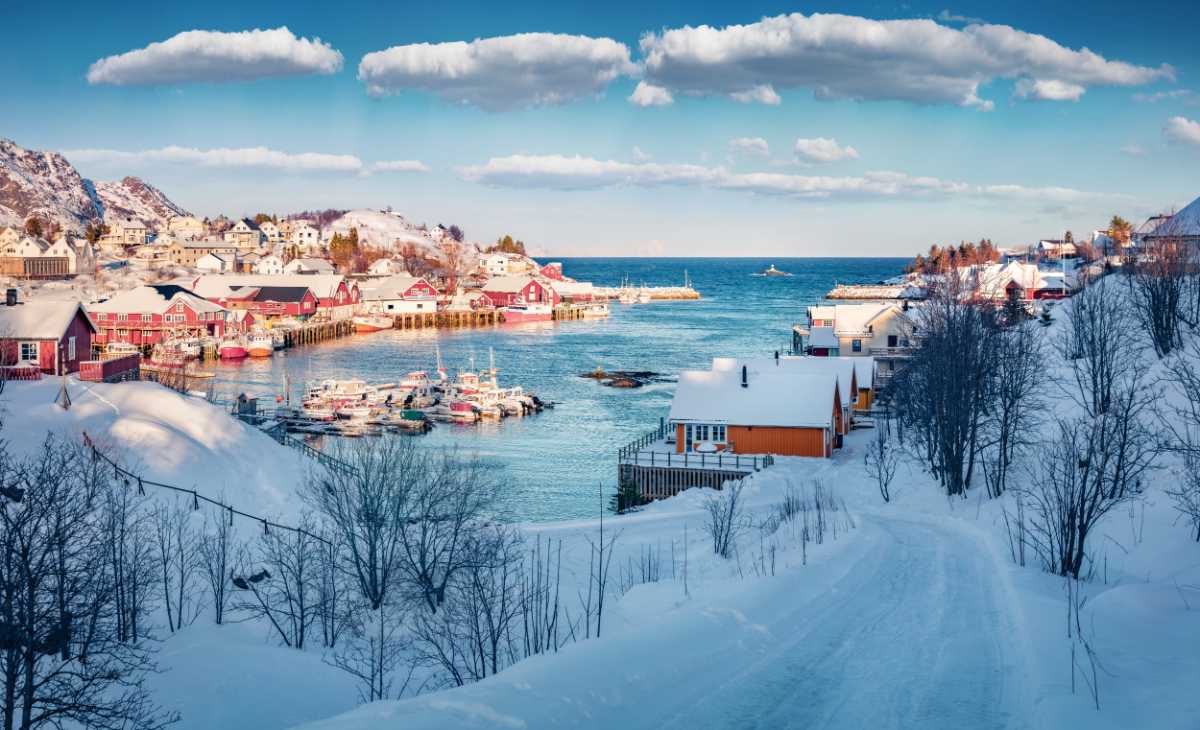 Different areas in Norway experience very different temperatures and weather conditions. Let’s take a look at what you can expect in each of these areas in terms of Norway’s weather.

Located in Southern Norway, Oslo sees relatively mild and stable weather. The Southern Coast of Norway, from Mandal to Oslo, and Eastern Norway experience the warmest weather in Norway.

The Setesdal and Telemark regions, which are more inland from the Southern Coast, are known to have the highest temperatures. Nesbyen, an inland town in South Norway, experienced the highest Norway temperature on record, which was 35°C.

In Northern Norway, spring usually arrives later, around May or June. The city of Tromso in Northern Norway, located inside a small fjord, sees cool summers reaching a high of 15°C and winters dropping to -5°C.

Western Norway enjoys the title of being one of the wettest places in Europe! The large amount of rainfall in the areas just inland of the Western Coast of Norway is due to westerly winds. They cause moist air to flow across the country from the ocean.

Bergen, the second-largest city in Norway, is located in the heart of Fjord Norway on the West Coast. The city sees temperatures just above freezing during winter and around 16°C in summer. The coastal air cools Bergen down during summer and makes the temperature milder during winter.

The snowline in Norway – the line above which snow lies – is relatively low at 1500 meters above sea level. This means that the weather in Norway is always snowy on some mountain peaks!

Get Set For Your Trip to Norway!

Now you’re all clued-up about what weather in Norway is like, let’s get started making your dream Norway vacation a reality.

Ready to adventure through Norway’s frozen fjords in winter? To bathe in the country’s warm seas during summer and experience the magical changing of seasons during spring and fall?

Take a look through our range of affordable campervan rentals in Norway. Pick the perfect vehicle for your road trip through this fascinating country. It'll give you the ultimate freedom and flexibility to explore wherever your heart desires. No doubt traveling by campervan is the best way to discover the beauty of Norway! 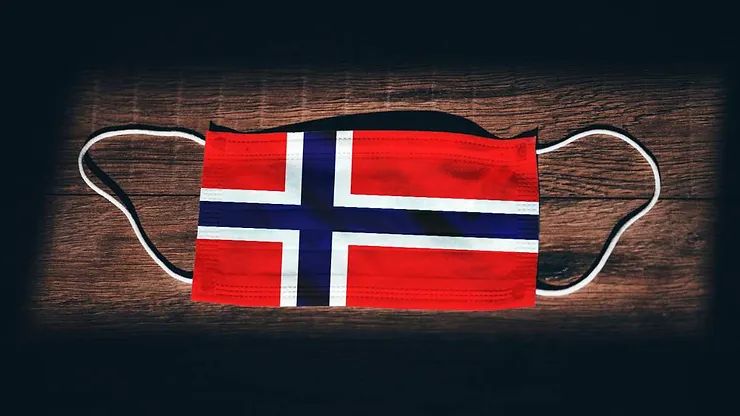 All You Need To Know About Norway Covid Travel Restrictions

Is Norway open for travel? Here’s your up-to-date guide to all you need to know about Norway covid restrictions to prepare for your perfect Norway vacation.

Let’s go on an adventure! 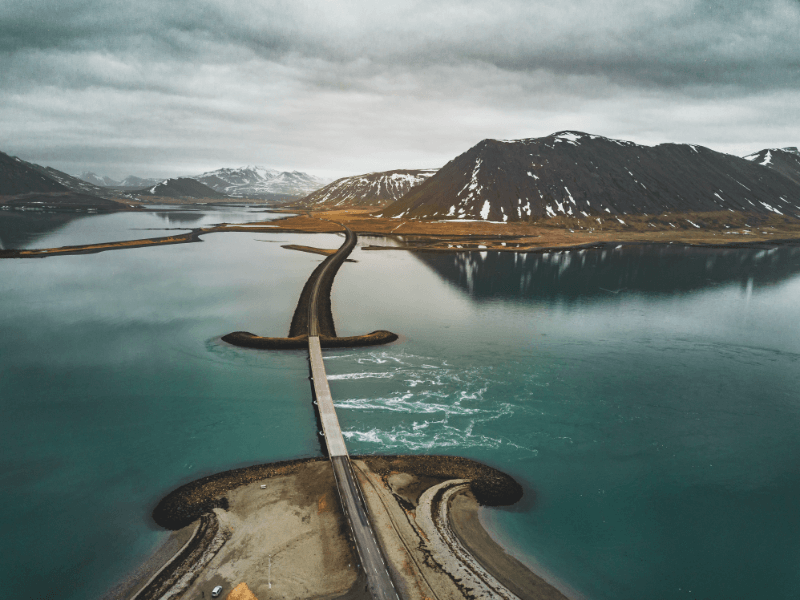 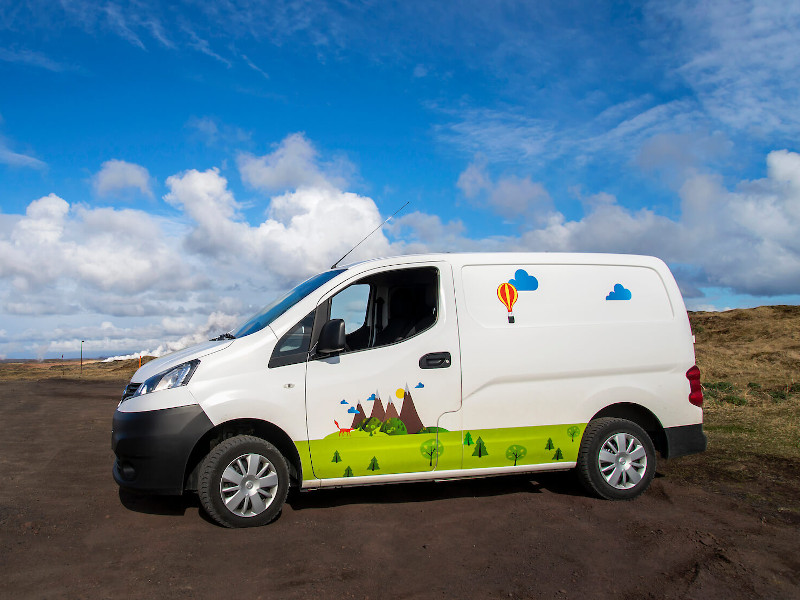